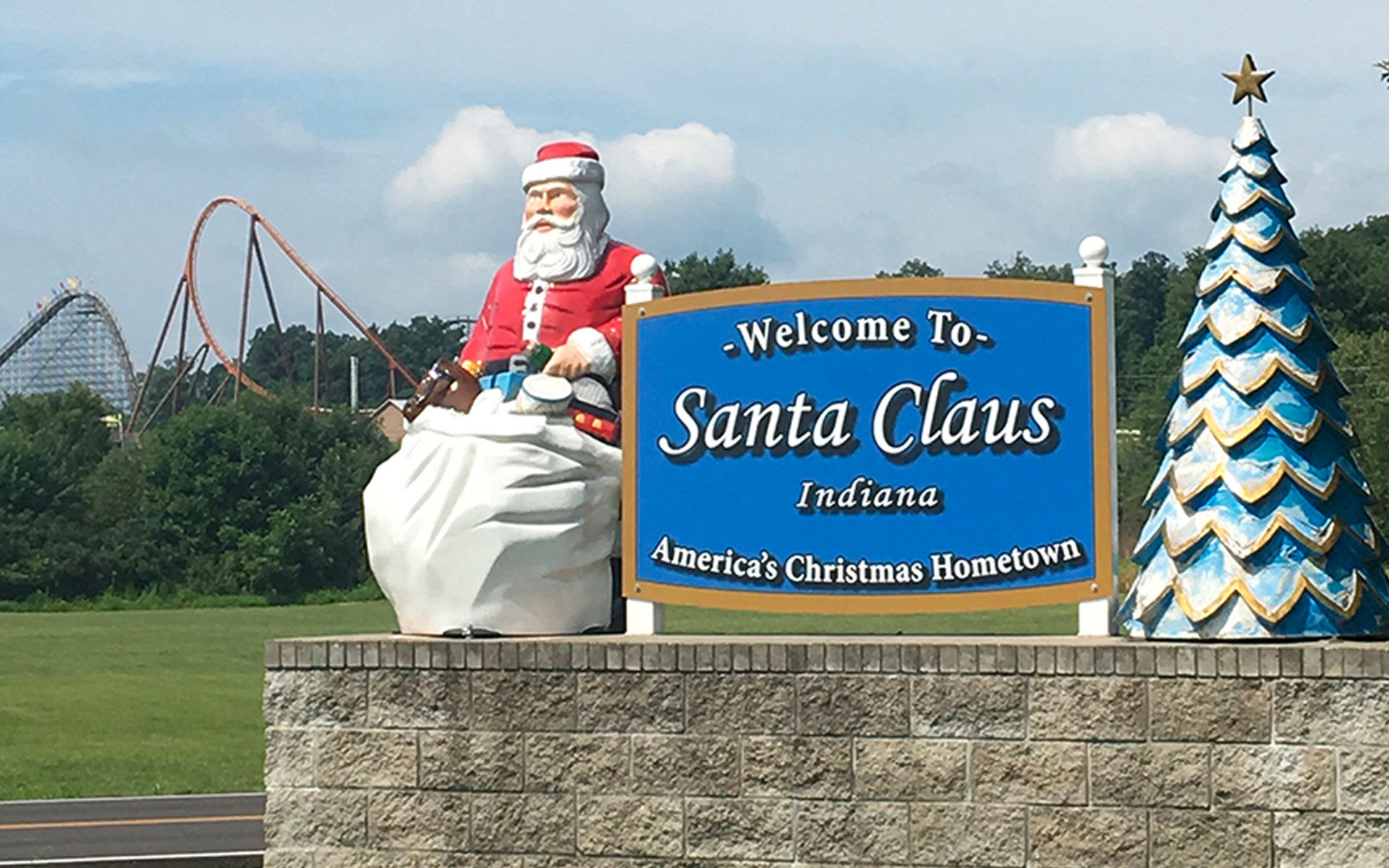 One might not expect to see a 40-ton statue of Santa Claus in the rolling hills of Southern Indiana. But, 70-degree summer days don’t stop this Indiana town from celebrating the magic of Christmas year-round.

Santa Claus, originally Santa Fe, was designed in 1849. After discovering Indiana already had a post office assigned to Santa Fe, citizens came together to decide on a new name. They wanted to keep “Santa,” so Santa Claus fit. A tale developed over time on why the town prompted the name change. Some believe one Christmas Eve a door blew open, and Santa Claus appeared in front of a young girl.

Santa Claus began receiving mail to Santa since the name change, and it has not stopped since. “Ripley’s Believe It or Not!” even created a feature on Santa Claus being the only post office with that name, creating a plethora of letters to Santa.

The town remained relatively quiet until 1933, when former lawyer Milton Harris came to Santa Claus to create decorative sleighs. The following years were a time of developmental improvements in Santa Claus, including the construction of Santa’s Candy Castle and a souvenir shop.

The opening of Santa Claus Land, which later became Holiday World & Splashin’ Safari, made Santa Claus a staple for fun family recreation. Full of groundbreaking rides, the park is the nation’s first theme park and is a popular attraction for people of all ages.

Dedicated to providing old-fashioned family fun, Santa Claus Land became the nation’s first theme park in August 1946. Industrialist Louis J. Koch noticed children were disappointed after discovering Santa Claus did not actually live in the town, so he decided to open the park as a retirement project. As business grew, so did the number of holidays included in park festivities. In the mid-80s, the theme park added Halloween and the Fourth of July, which sparked the name change to Holiday World. Almost 10 years later, Spashin’ Safari Water Park was added and has since been named the No. 1 Water Park by USA Today.

The park has record-breaking rides including the Mammoth (world’s longest water coaster) and Thunderbird (America’s only launched wing rollercoaster). Activities include more than just rides — there is also entertainment such as comedy shows and concerts. Additionally, the park offers unlimited soft drinks and free parking with admission.

Just one mile south of Holiday World is Santa’s Candy Castle, a historic castle that blends old-world charm with modern day fun. The tourist attraction has a selection of candy, handmade confections and over 30 flavors of cocoa and sizes including “Avalanche” — the world’s largest cocoa beverage. In addition, there are rooms dedicated to both PEZ and Jelly Belly candies.

Children can log on to the castle’s exclusive North Pole Network and talk to an elf. Visitors on Santa’s good list will receive an official Good List Certificate to take home. Furthermore, the castle has a Christmas gift shop including a large selection of Christmas books, ornaments and stocking stuffers.

Guests can walk through Elf Park or swing on the poolside hammock. The cottages offer special packages for Halloween and Christmas. Santa’s Cottages offers trick or treating, train rides and campfires every weekend in October. During the first two weekends in December, the cottage offers housing deals and a free train ride on the Reindeer Express.

Part of Hoosier Wine Trail, Monkey Hollow Winery and Distillery offers award-winning wines, distilled spirits and locally produced meats and cheeses. It is located just 12 minutes from Santa Claus, in St. Meinrad. The family owned business planted its first 300 grapes in fall 2003 and the vineyard rapidly expanded and is now approximately seven acres. From dry to semi-sweet to sweet, there is a wide variety of wines to meet the needs of everyone’s taste buds.  An online store is also available.

Locally owned and operated, Frosty’s Fun Center is an arcade, pizzeria and ice cream parlor. Guests say Frosty’s Fun Center has a friendly staff and affordable prices. It also has entertainment such as a Christmas themed 18-hole miniature golf course, car racing and a claw. Outside of the building, there’s a giant melting snowman.

Open for breakfast, lunch and dinner, The Rustic also has a bar for guests to enjoy. The menu features lunch and weekend specials, a kids’ menu and a menu with lower-calorie options. Visitors can also tee off on the golf course. A patio, dining room and conference room are available for events.