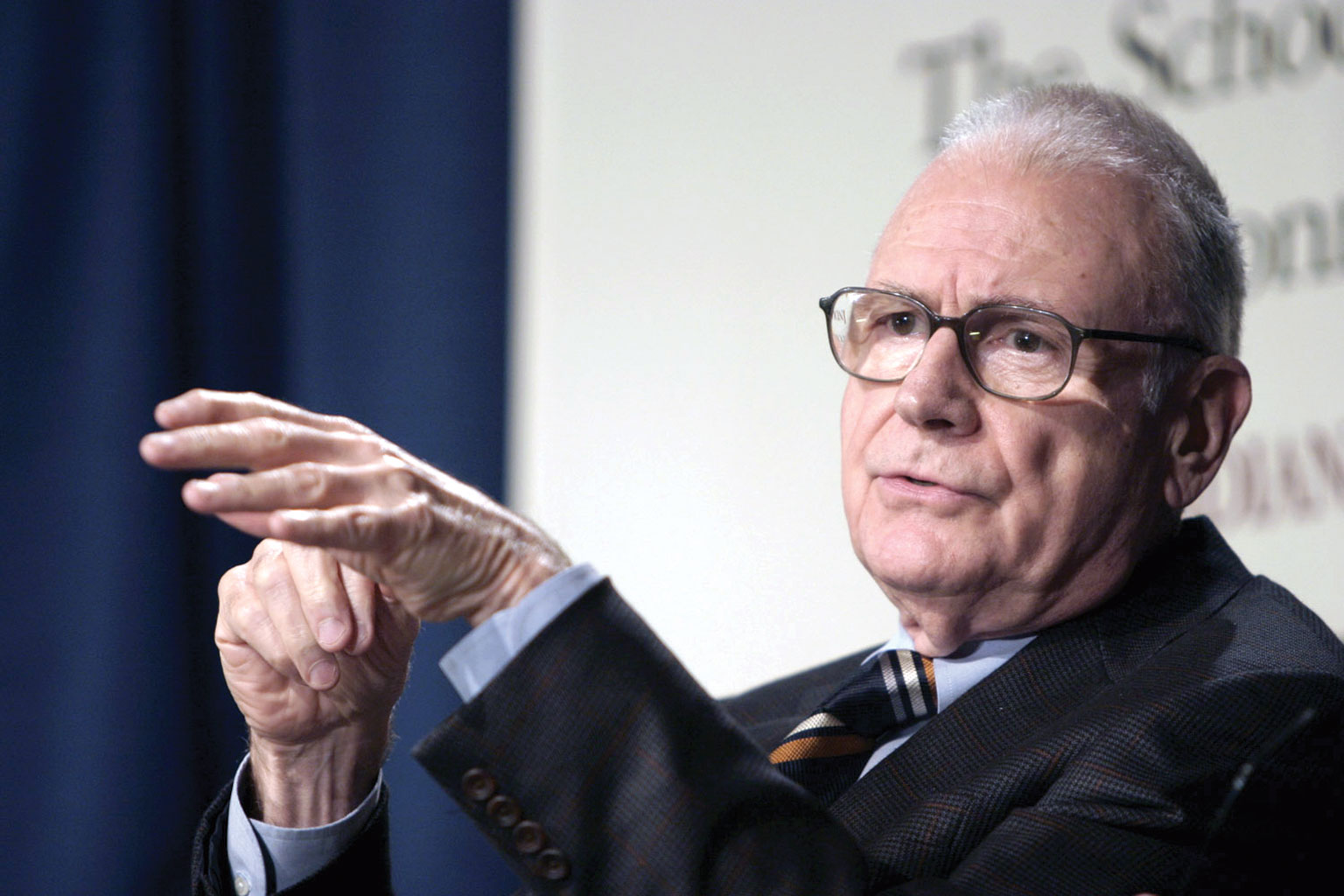 “Almost every day we are reminded how difficult it is building consensus to solve problems in our large and diverse country. The framers of the Constitution envisioned Congress where the great variety of voices and opinions in America would get full airing as new laws are considered. When Congress is functioning as it should, it is a contentious place, where competing proposals are energetically debated.”– Lee Hamilton, director, Center on Congress

The dangers of a world at war, the sufferings of a nation tearing itself apart with racial and ethnic strife.

For decades, these have been the preoccupations of the elder statesman from Indiana, the Honorable Lee Herbert Hamilton.

Hamilton, who served Indiana’s 9th Congressional District for 34 years, specifically the period from January 1965 to January 1999, is one of just two surviving members of ‘the Democratic class of 1965’ a group of freshmen legislators. (The other is John Conyers.)

Hamilton, who today is the Director of the Center on Congress, based on the I.U. Bloomington campus, has explained that in the arena of civil rights, it’s impossible to separate the political from the personal. He points to his own school years, growing up in segregated Southern Indiana.

Before he was a Indiana congressman fighting for the passage of civil rights legislation, he was a basketball star at an all-white school.

“I grew up in Evansville, I grew up in a segregated city,” reflected Hamilton, who celebrates his 84th birthday on April 20.

“We had no Blacks. I played basketball. I’m afraid I didn’t think very much about it. I just thought that was the way the world was. It’s not to my credit, I’m sure. But I was in high school, and of course, national affairs are not uppermost in your mind.”

Hamilton led the Evansville Central Bears in the IHSAA tournament. In 1946, the Bears made the State Semi-finals, in 1947, they made the State Quarter-finals; as a senior, he led them to the championship game. An All-State star as a senior, Hamilton received the Trestor Award for mental attitude.

However, it wasn’t until joining the DePauw Tigers college basketball team that he had an African-American teammate, said Hamilton, who graduated from DePauw University in 1952 and was inducted into the Indiana Basketball Hall of Fame in 1982.

After graduating from the IU School of Law in Bloomington in 1956, he worked as a lawyer in private practice for the next 10 years in Columbus.

The Civil Rights Act of 1964, and the companion acts which followed, should be considered “landmark legislation” among the most important historical events in American history, Hamilton said.

“I look upon it as a huge milestone in the history of the country, and the state. It’s a turning point, one of the revolutions that have occurred,” said Hamilton.

“They (civil rights acts) formed a base, they formed a platform from which the country began to wrestle much more seriously with the problem of inequality,” said Hamilton. “This was a hugely important time in American history.”

“The country had gone through, and was gone through a great bit of agony, anxiety over civil rights. It was tearing the country apart in many ways.”

During this important period in American history, “I was representing the 9th Congressional district, in southern Indiana, with many rural voters, very few urban voters.”

“There was clearly opposition, there were people who didn’t like it,” said Hamilton. “I used to spend a lot of time shaking hands with people, and I would frequently be met with the comment, ‘oh, you support that civil rights legislation’ obviously, in a negative tone of voice.”

“The African American population was very limited in that part of the state, few in Jeffersonville and Albany, and it was a very tough (political) sale,” said Hamilton. “There was a great deal of reluctance to support the Civil Rights Movement in the area.

“I recognized that there were political risks. On the other hands, there were a lot of people that supported it. The racial aspect of the (civil rights legislation) was clear, was apparent.”

The outcome of the Civil Rights Act of 1964 and the other civil rights legislative acts which followed “has been terrific” Hamilton said.

He points to increased opportunities for African-Americans, Hispanics and other minority groups in the business, political, sports and entertainment worlds.

“Yes, we’re still struggling. But it’s given me a great deal of pleasure to see members of that community come into positions of leadership, in all kinds of fields.”

Civil Rights legislation has even changed the nation’s calendar, Hamilton remarked, pointing out the establishment of Dr. Martin Luther King Day, a federal holiday celebrated the third Monday in January.

“Today, you can’t find anyone against Martin Luther King, he’s a national hero. But back then, there was opposition. Incidentally, I would say to you that Dr. Martin Luther Ling is the only American with a national holiday named after him,” said Hamilton.

Although President Ronald Reagan signed the Martin Luther King, Jr. Day holiday into law in 1983, it was observed three years later, and met with some resistance in certain states. However, by 2000, it was observed in all 50 states.

The civil rights legislation, with workplace and other protections, as well as the passage of the Martin Luther King holiday, represents real national progress, said Hamilton.

Mr. Hamilton served on the Congressional Commission on the Strategic Posture of the United States.  He was appointed to the National War Powers Commission, and served as co-chair of the Iraq Study Group, a forward-looking, bi-partisan assessment of the situation in Iraq, created at the urging of Congress.  Hamilton served as vice-chair of the 9/11 Commission and co-chaired the 9/11 Public Discourse Project, established to monitor implementation of the Commission’s recommendations.  He was co-chair of the Independent Task Force on Immigration and America’s Future and also served as a member of the Commission on Federal Election Reform, the U.S. Commission on National Security in the 21st Century (the Hart-Rudman Commission), and the FBI Director’s Advisory Board.

He was viewed as a potential Democratic vice-presidential running mate in 1984, 1988, and 1992, due to his foreign policy credentials and Indiana’s potential to turn into a blue state due to economic concerns.

He is currently a member of the President’s Intelligence Advisory Board, the President’s Homeland Security Advisory Council, the CIA External Advisory Board, and the U.S. Department of Homeland Security Task Force on Preventing the Entry of Weapons of Mass Effect on American Soil.  He serves as co-chair of the U.S. Department of Energy’s Blue Ribbon Commission on America’s Nuclear Future with General Brent Scowcroft; with Justice Sandra Day O’Connor, he is co-chair of the National Advisory Committee to the Campaign for the Civic Mission of Schools.

Mr. Hamilton is the author of How Congress Works and Why You Should Care; Strengthening Congress; A Creative Tension – The Foreign Policy Roles of the President and Congress; and co-author of Without Precedent: The Inside Story of the 9/11 Commission and The Iraq Study Group Report.

In 2005, Hamilton received the U.S. Senator John Heinz Award for Greatest Public Service by an Elected or Appointed Official, an award given out annually by Jefferson Awards. He is widowed.