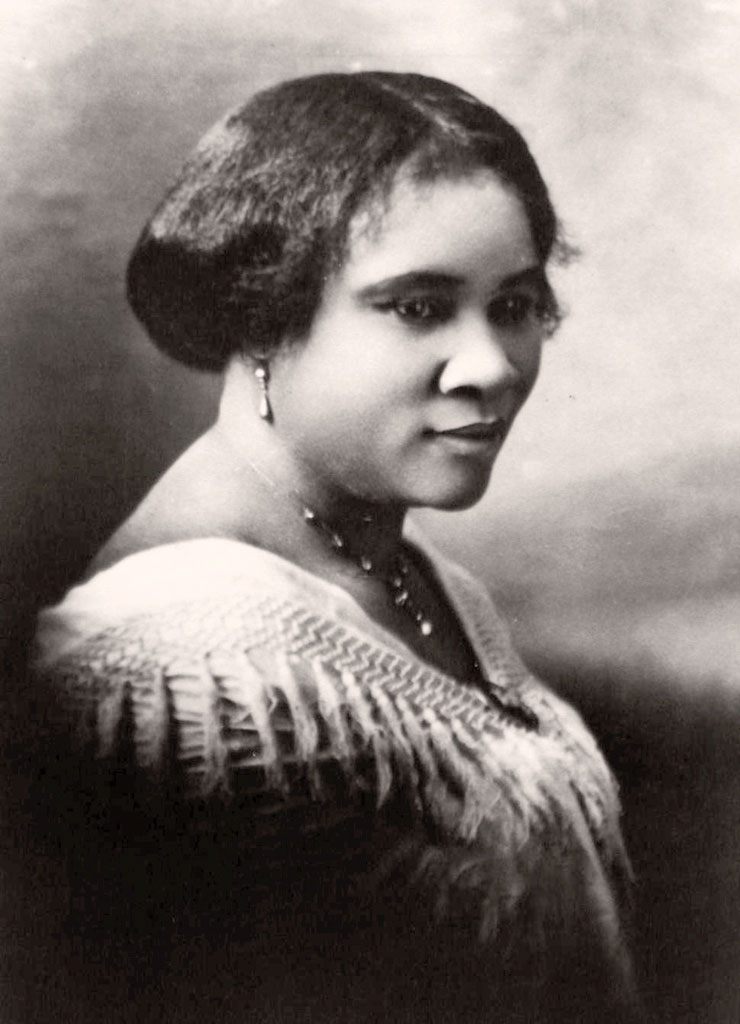 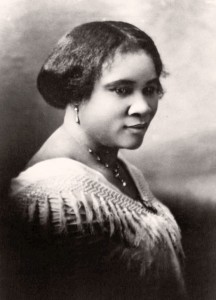 Sarah Breedlove Walker (1867-1919), who rose to fame as Madame C.J. Walker, made her fortune in classic entrepreneurial style by identifying and fulfilling an untapped market, a need for African-American beauty and hair care products.

She recruited a small army of sales agents, organized them into clubs, and established a mail order business. She emphasized political engagement and philanthropy, not just for herself, but for her sales staff.

Her Madame C.J. Walker Manufacturing Company became an impressive and inspiring landmark, not unlike the famed Madame Walker Building of Indianapolis, which still presides over Indiana Avenue today.

Walker, whose parents had been enslaved on a Louisiana plantation, was the first generation in her American-American family to be born into freedom following the 1863 Emancipation Proclamation.

The arc of her life encompassed poverty, illiteracy, and a lack of opportunity, to wealth, education, and providing mighty opportunities for others. This is why, undoubtedly, the story of her life and business success will continue to be told and retold: although she was born on a plantation, she lived and worked in freedom, here in Indiana.

Below is a quick look at other key individuals and advancements, both in the state and the nation, which have led to diversity and equality in the business world and other arenas.

1787– Congress establishes the land which includes present-day Indiana under the Northwest Ordinance, which states, “that there shall be neither slavery nor involuntary servitude in the said territory.”

1816- Indiana adapts its first constitution. It restricts the right to vote only to those white, male citizens over the age of 21 who had resided in Indiana for one year.

1816-1830 – Abraham Lincoln grows from a child to a man of 21 in what is now Spencer County, Ind. Born to parents who opposed slavery, Lincoln saw his father lose his wealth due to faulty land titles. He became a lawyer, and later the 16th president of the United States.

1850– Edward Ralph May, a Democrat, cast the only vote at the Indiana Constitutional Convention in favor of granting the vote to African-American men. It was defeated, 122-1.

1861– President Lincoln signed the Confiscation Act, which authorized judicial proceedings to confiscate and free slaves who were being used to support the Confederate military.

1863– As the Civil War continues to rage, Lincoln signs the Emancipation Proclamation, which freed slaves in ten states at war with the north. It freed three million of an estimated four million people held in slavery.

1917– Indiana grants women presidential suffrage, and in 1920, Indiana ratified the 19th Amendment. However, Hoosier women could not vote at the state level until a special state election was held September 1921.

1935– An intrepid, smiling woman with close-cropped hair joins the staff of Purdue University in West Lafayette, Ind. Amelia Mary Earhart was the first woman to fly solo across the Atlantic Ocean, receiving the Distinguished Flying Cross for her achievement. She helped form the Ninety-Nines, an organization for female pilots, and at Purdue, helped inspire women to be fearless in their choice of careers. She was a member of the National Women’s Party and supported the Equal Rights Amendment. Earhart and her Lockheed Model 10 Electra flew into history in 1937, when she disappeared over the central Pacific Ocean during an attempt to fly around the world.

In August of 1965, President Lyndon B. Johnson signed the Voting Rights Act into law. The act, which was amended by Congress five times to extend its reach, sought to protect the vote of all United States citizens. The law outlawed literacy tests and other tactics used to suppress potential voters. In the same year, Johnson signed Executive Order 11246 which “prohibits federal contractors and federally assisted construction contractors and subcontractors, who do over $10,000 in government business in one year from discriminating in employment decisions on the basis of race, color, religion, sex, or national origin.”

Intended as a follow-up to the Civil Rights Act of 1964, the Fair Housing Act, which was also signed by President Johnson, sought to address the discrimination many Americans experienced in the sale, rental and financing of housing based on race, religion, national origin and sex.

1979 – The U.S. Hispanic Chamber of Commerce was established.

1984 – US Pan Asian American Chamber of Commerce Education Foundation (USPAACC) was founded. The nonprofit’s aim is to advocate for equal opportunities for Asian American (includes East, South and Southeast Asian and Pacific Islanders) businesses, professionals, and business organizations in both the corporate and government procurement market.

1987 – Intertribal Agriculture Council is founded. The council’s mission is to provide a unified effort to promote change in Indian Agriculture for the benefit of Indian People.

1991 – President Bush signs the Civil Rights Act of 1991. The law introduced the option to seek damages for emotional distress and provided the right to a jury trial on claims of discrimination. The act aimed to deter instances of unlawful harassment.

1994– Employment Non-Discrimination Act (EDNA) was first introduced to the Senate. The legislation prohibited hiring and employment discrimination on the basis of sexual orientation or gender identity. Since its founding, EDNA would be introduced in every Congress with the exception of the 109th body. EDNA finally passed the Senate on November 7, 2013 with bipartisan support. The final vote was 64-32.

1982-1985 – Katie Hall serves in the 1st District as a U.S. Representative, the first African-American woman elected to Congress from Indiana

1997-2007– Julia May Carson, a Democrat, becomes the first woman and African-American to represent the 7th District in the U.S. House of Representatives.

2003 – The Supreme Court rules (5-4) that race can be used as a factor in considering university admission. This decision upheld University of Michigan’s Law School policy on affirmative action.

2009– President Barack Obama is sworn into office as the nation’s 44th president, the first African-American to serve in the United States’ highest office. A former civil rights attorney, Obama taught constitutional law at the University of Chicago Law School from 1992 to 2004. He served three terms in the 13th District in the Illinois Senate from 1997 to 2004.

Obama gathered wide attention by delivering the 2004 keynote address to the Democratic National Convention, in a speech honoring diversity. “I stand here today, grateful for the diversity of my heritage, aware that my parents’ dreams live on in my two precious daughters. I stand here knowing that my story is part of the larger American story, that I owe a debt to all who came before me, and that in no other country on Earth is my story even possible.”