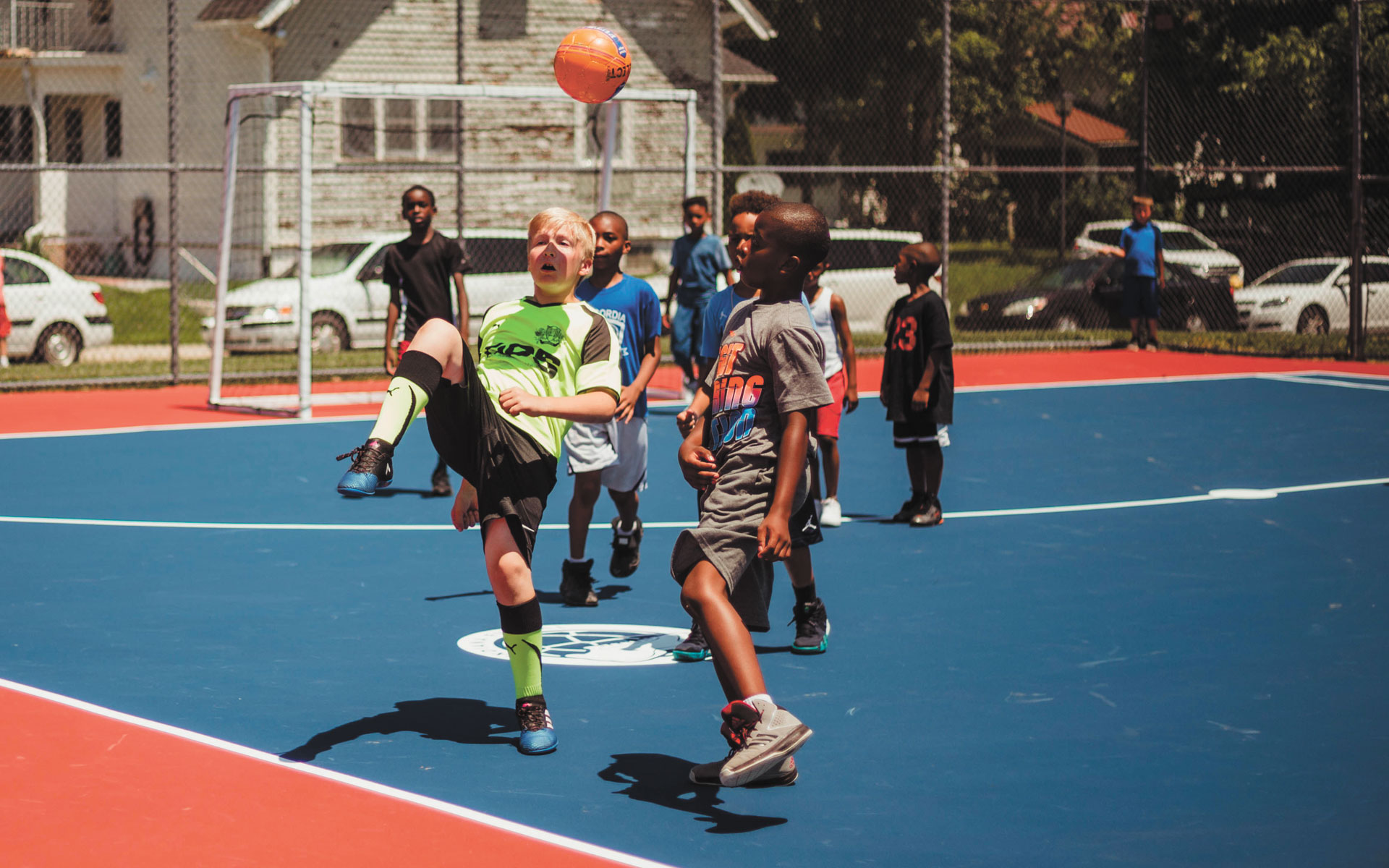 “The market that services the suburbs is somewhat saturated with the current offerings and location,” says Guthrie. “We’re going to need to be more innovative to give more access to kids. We’re looking at it to get membership, but it’s just the right thing to do, to offer our sport to kids who wouldn’t have access otherwise.”

Guthrie has teamed with a variety of sponsors, including Kroger and the Indy Eleven Soccer Foundation, to transform generally unused tennis courts into new hard surface “fields” for futsal, a miniaturized form of soccer, geared toward young players. Indiana Soccer has personally built a pair of courts in both Indianapolis and Fort Wayne and provided assistance on another four.

Futsal is basically soccer on a smaller court, with less players and a heavier ball more suited to crowded urban environs.

“The ball doesn’t bounce as well, and can’t be launched like a regular soccer ball,” Belskus explains. “It’s beneficial for young people developing skills because it’s a faster game played on such a small court. The heavier ball helps kids develop the foot skills and timing … of good footwork.”

While popular internationally, futsal’s been slower to catch in America, even as interest in soccer has boomed. A lot of it simply comes down to a lack of facilities. Soccer fields are large (one-and-a-half times the size of a football field) and when the sport took off here that kind of greenspace was most readily found in the suburbs. That doesn’t really exist in the city.

Seemingly as a result, the number of kids playing soccer has hit a ceiling in the early aughts and only increased slowly since. Indiana Soccer feels broadening access will help the sport catalyze greater growth, and the best way to do that is to bring it into the city.

“We go into a demographic where most kids have free or reduced lunch because statistics tell us that very few kids whose family income is $30,000 or below play organized sports,” Guthrie explains. “When they’re prioritizing dollars that one doesn’t usually fit into the equation.”

With only five players as opposed to 11, it’s a lot easier to pull together a futsal squad. Plus the court is small enough to make sense for pickup games with even smaller teams. Indiana Soccer has also reoriented their approach, focusing on several-day events as opposed to league play and club tournaments.

“It fits well in the inner city. You don’t need 18 kids on a team and you don’t need a commitment for a whole season of play,” Guthrie says. “You come to an event and play for the weekend. We might do another event four or five weeks from now but you’re not committed to league structure.”

The City of Indianapolis also has been key, allowing Indiana Soccer to develop their process on an unused court. Fort Wayne even set up trail cameras for a year beforehand to insure the tennis courts weren’t being used. Going forward, Indianapolis’ Parks Department has identified another dozen courts, which Indiana Soccer is currently evaluating for viability and cost.

Meanwhile they’ve put out the message they’re here to help. “If there is a municipality that has a desire to remodel their hard service assets to fit the demographic that is consistent with our target market … we’ll figure out a way to make that happen,” Guthrie says.

The Indy Eleven Foundation is similarly looking at expanding their footprint and demographic reach even beyond futsal.

“We’re keen on putting together an urban soccer academy or program, so we’re investigating some options there,” Belskus says. “[Indy Eleven coach] Martin Rennie has some experience doing something like that in the Cleveland area. The timing seems right to start an initiative like that.”